This extension adds functionality for inserting and displaying math equations (LaTeX) and figures (PSPicture). Also, it supports equation numbering. The extension is based on MathJax, LaTeX2JS, and Mathapedia.

This extension has two versions: free and paid. The paid full version has the following features.

2.12.6. Nov 29, 2021. Solved an issue for previewing on the modal. The issue was pushed with the previous version 2.12.5. Also improved visibility of the modal window on site's front-end.

2.12.3. Sep 14, 2021. Solved an issue on javascript script initializing for the rendering of PSPictures. Also, LaTeX2HTML5 source files have been renewed. The changes have affected the free basic version too and it was numbered as 2.8.3.

2.12.2. Sep 7, 2021. For the content plugin, solved an issue for multiple executions of the PSPicture script. The free basic version has been updated too and it was numbered as 2.8.2. For the paid version, the system plugin has been updated due to confliction of events "dom ready" and "dom modified".

2.12.1. Aug 24, 2021. Patch for Joomla 4. All known issues are solved. MathJAX CDN sources are updated according to the instructions on the documentation of MathJax. The free basic version has been updated too and it was numbered as 2.8.1.

2.12.0. Nov 9, 2018. Descriptions and language files were updated. The configuration form was improved. A minor bug for the back-end about page was solved.

2.4.0. November 18, 2014. Conversion, on the fly, the function has been improved. Also some minor development in the content plugin. 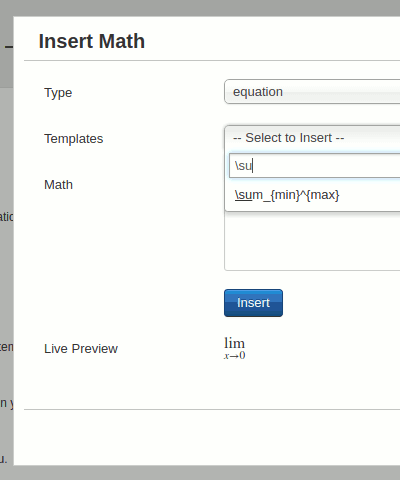 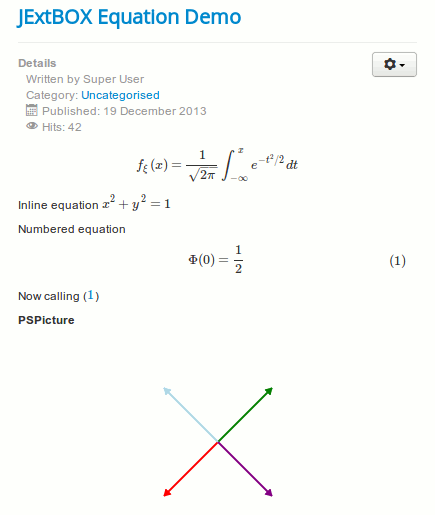 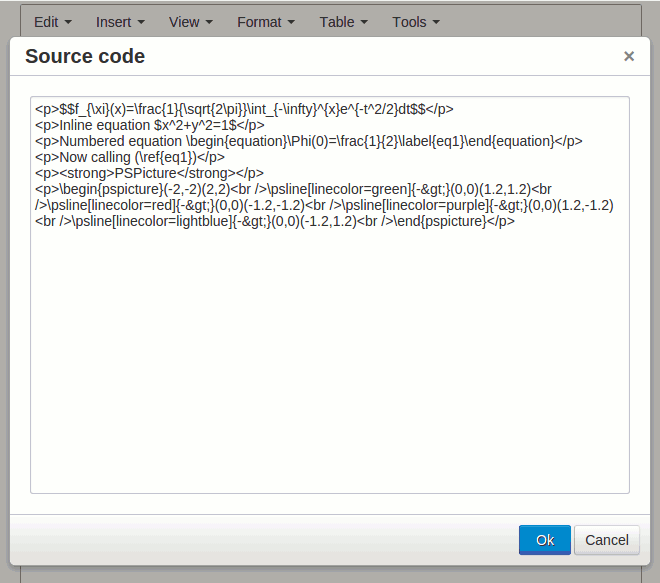 You have to write all your equations by using the LaTeX script. We recommend using the editor button "Insert Math" for writing and inserting math equations and figures. The paid full version of this extension adds this button in the content editor. It opens a modal window with a live preview for LaTeX equations.

The functionality for displaying math equations is based on MathJax. Also please visit LaTeX2JS or Mathapedia to know about PSPicture on the web page.

When you insert math equations, beware of equation label conflictions in one page and bad syntaxes.

One of the effective methods to clean the tag <span> is the command "Clear Formatting" of the editor.

Finally, remember the best method to avoid wrong syntaxes is using the editor button or the modal window is provided by the paid full version.

You can use the following codes to test the extension.

Configuration of the paid full version

Typically, the extension has not required any configurations. If you have newly installed, in other words, if you haven't updated the full version, you don't need to configure it. However, if you want to manually configure, please follow the below steps.

If you use the extension, do not disable any JExtBOX Equation plugins. Also, we recommend you choose the "whole front-end pages" option for the "Apply to" parameter.

For the MathJax version, we recommend version 2 is a stable version of MathJax. The back-end functionalities (the modal window for inserting equations) are developed with version 2 only.

You can customize its configuration such as the following:

It requires additional operations for several specific versions are listed below.

Suppose the paid full version is installed. If you want to insert a math equation into a content, please follow the steps below.

JExtBOX Equation is free software: you can redistribute it and/or modify it under the terms of the GNU General Public License as published by the Free Software Foundation, either version 3 of the License, or (at your option) any later version.

JExtBOX Equation is distributed in the hope that it will be useful, but WITHOUT ANY WARRANTY; without even the implied warranty of MERCHANTABILITY or FITNESS FOR A PARTICULAR PURPOSE. See the GNU General Public License for more details.